Swimming into and out of the pain and the promise of this time. The masking and unmasking ... veiling and unveiling ...

The rational part of me is able to name different elements and place them in relation to one another: history; politics, power, polarizations; long-entrenched systematic and systemic abuse; greed and fear; the legacies of individual and collective traumas; the kindness of people everywhere.

But internally, it continues to feel as though things have been detached from their moorings, are unhinged, are floating around. Memories from childhood bump up against images from last night’s dreams, and the deer we met on last Saturday’s nature walk.

What is near and what is far? What is real; what does that mean? In my inner world long-dead parents are continually present, as are physically distant children and grandchild, close family and dear friends. They are all, all of them so close I feel I could reach out and touch them; and I ache with the sadness of knowing that I cannot.

There is a thirst for coherence. A powerful desire to develop a voice that can speak out of this place. I am sharply aware that we must use the tools of critical thinking and focused, concerted action to address the urgent dangers present here and now. The warped structures, internally and externally, that have shaped us and shaped our institutions. The exploitation of fear by those of ill will and the imminent threat of disasters.

At the same time within me, a desire persists for something additional, something ELSE.

The drawing below erupted out of this desire for speaking differently.

If the drawing speaks another language, should I even try to analyze it in the old terms? I can't help, at least a bit, to name a few things I see.

This drawing emerged in the wake of the murder of George Floyd. Looking at it, I cannot help but see a noose. The red that is blood, and that is life, and also death. The larger loop of a womb-like space, a place to gestate something new, the hand that is reaching for it. The spiral that feels like a wormhole, a portal leading to a different reality ....

The Statues are Coming Down

And the statues are coming down. The narratives that have shaped the way we see and experience life are shattering. This is not new and the theme has long been with me. In high school we read Yeats' Second Coming, written in 1919 “Things fall apart, the center cannot hold …. The best lack all conviction, while the worst / Are full of passionate intensity".

The Stinky Cheese Man and Other Fairly Stupid Tales came into our lives as a children's book in 1992. I immediately took this book to be a symptom of the crumbling of our Master Narratives, the system falling apart. How very different from the sunny perfect English countryside that seemed my natural home, based on the children's books our mother read to us.

So: I have long been preoccupied with the question of where our next, collective mythology will come from. If not from a conscious focus, then where? Some kind of collective dream ...? In my PhD thesis, published 2006, I called the place we were and are in, "A Space Between Dreams".

Amid the tumbling statues, Colin Kaepernick looks as though perhaps he might be looking into that space ...

Before leaving this space and this topic, I want to recognize French feminist philosopher Sarah Kofman. Kofman's elegant, eloquent and powerful expression of the impossibility of narrative after the Holocaust is given in her memoir Paroles suffoquées, dedicated to the memory of her father who died in Auschwitz. Equally powerful is Kofman’s autobiography written not long before her suicide, Rue Ordener, Rue Labat.

I think we cannot rush to a new narrative; there are processes of the human heart that must be respected.

Ron Nirenberg is mayor of San Antonio. Soon after arriving here, I watched several of the daily briefings, still being given by him and Judge Nelson Wolff , reporting on the COVID situation in this city. I soon developed a strong respect for both men, whose jobs are very difficult. Wolff has made major contributions to this city and his books on the subject, at least the two I've read so far, make for lively and fascinating reading. Nirenberg is 43 years old (Wolff is 80) so his track record shorter but he continues to impress me. One thing I don't think I'll ever forget is the sentence that popped out of Nirenberg, unbidden, as he was responding to protests in the wake of George Floyd's murder. Speaking about the need to make changes, he said: “Hold me accountable. I’m the mayor of the goddam city, and we’re gonna make changes together!” I was touched by the combination of passion and possibly inappropriate language; follow the link to watch video and see for yourself.

I have also found it moving to witness the Mayor and the Judge in photo after photo, newsclip after newsclip, wearing their masks. These are Men, these are Men in Power. They are part of a power structure of male dominance that is shifting and that must shift. Seeing them with their masks touches me with something about their humility, enforced no doubt but accepted nonetheless, their understanding that there is something more powerful than they are, that they must acknowledge and bow before. 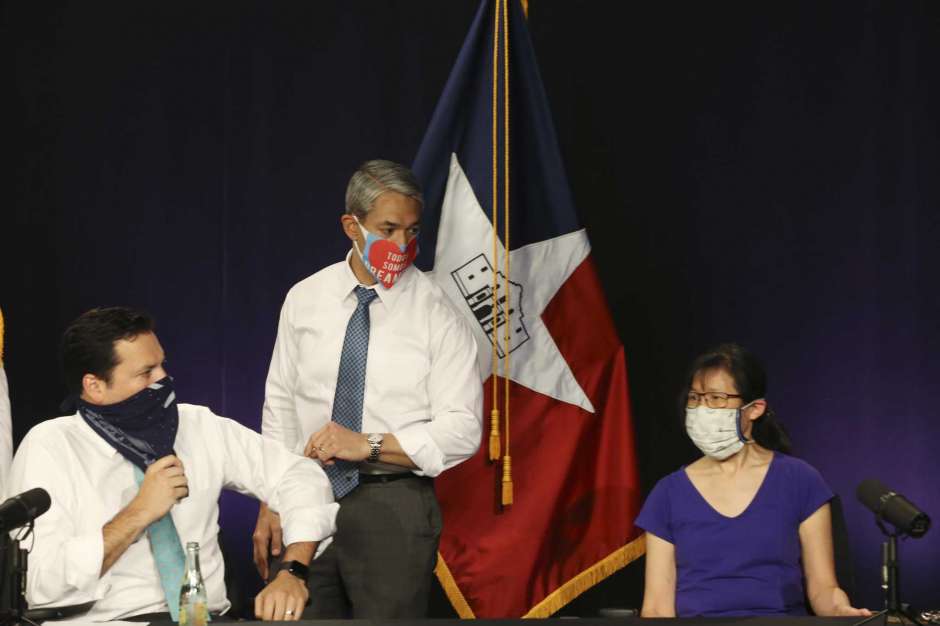 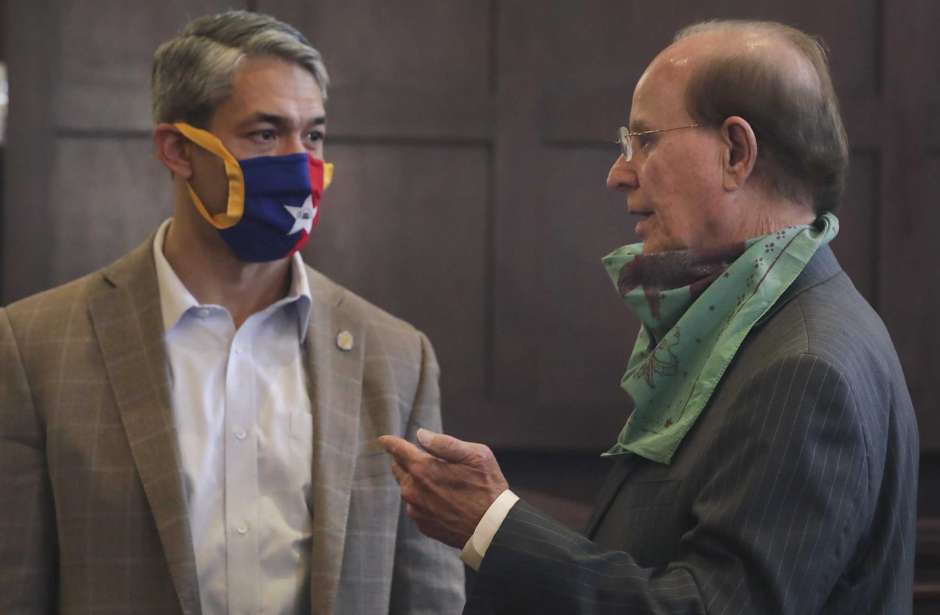 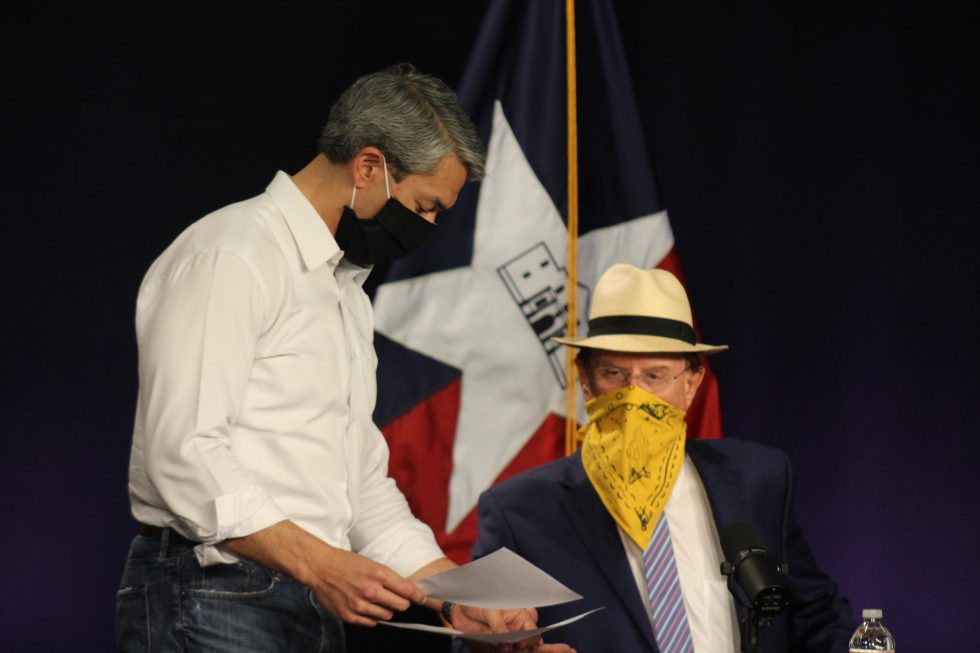 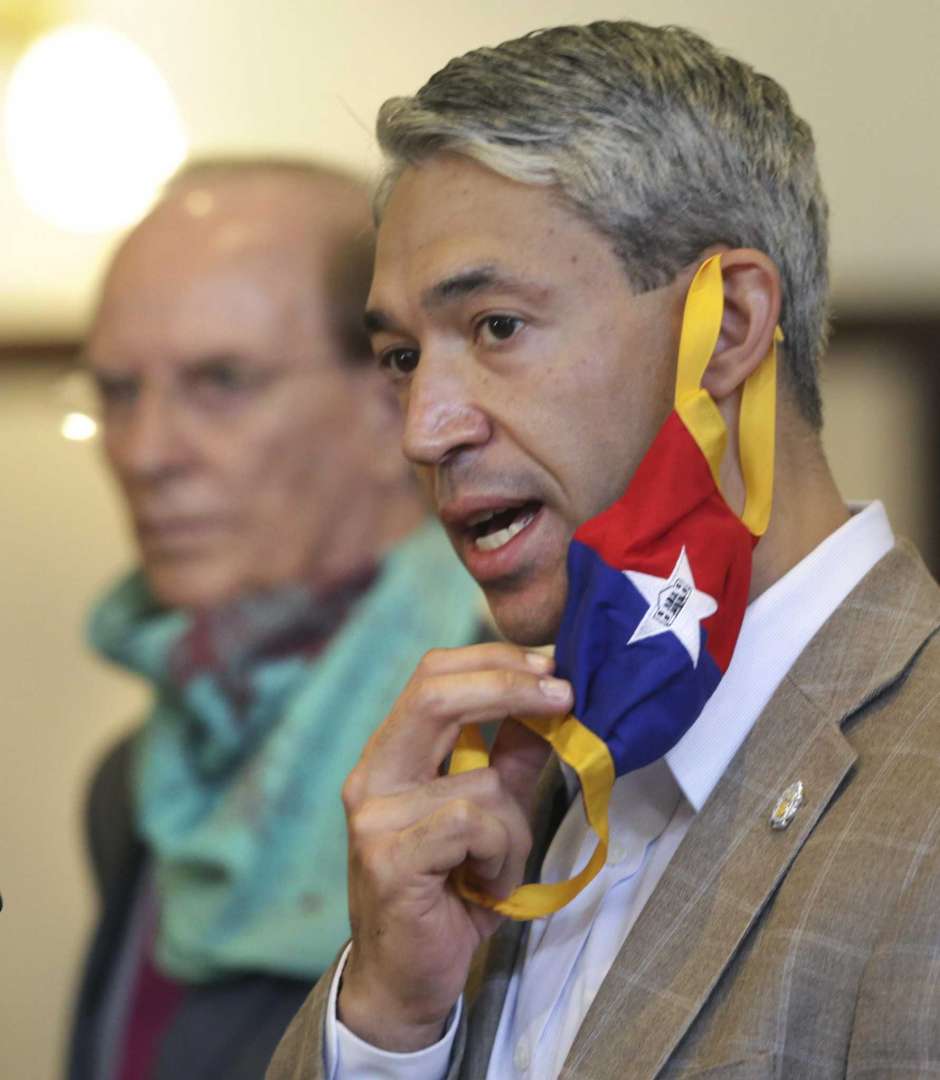 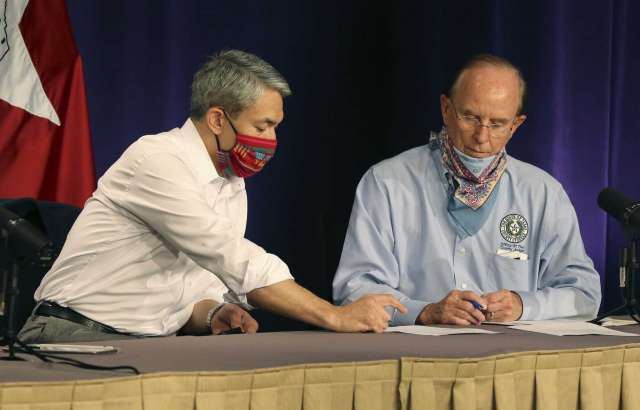 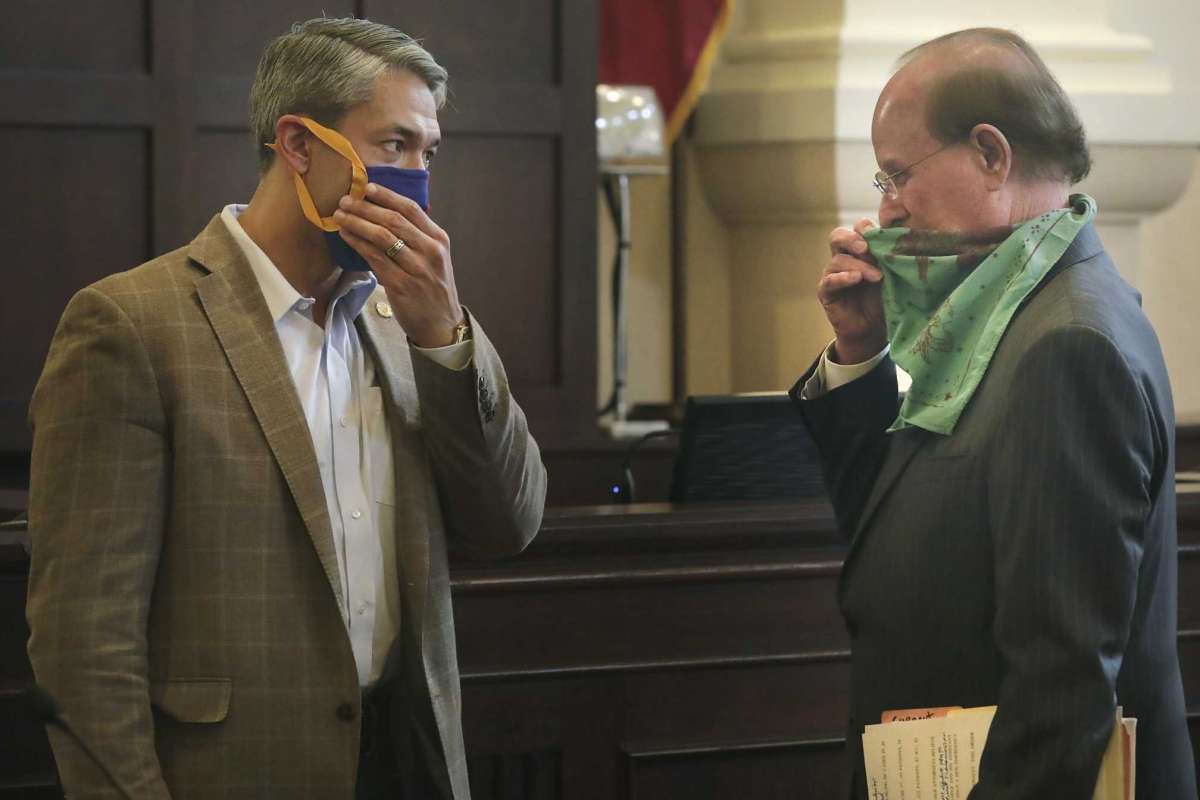 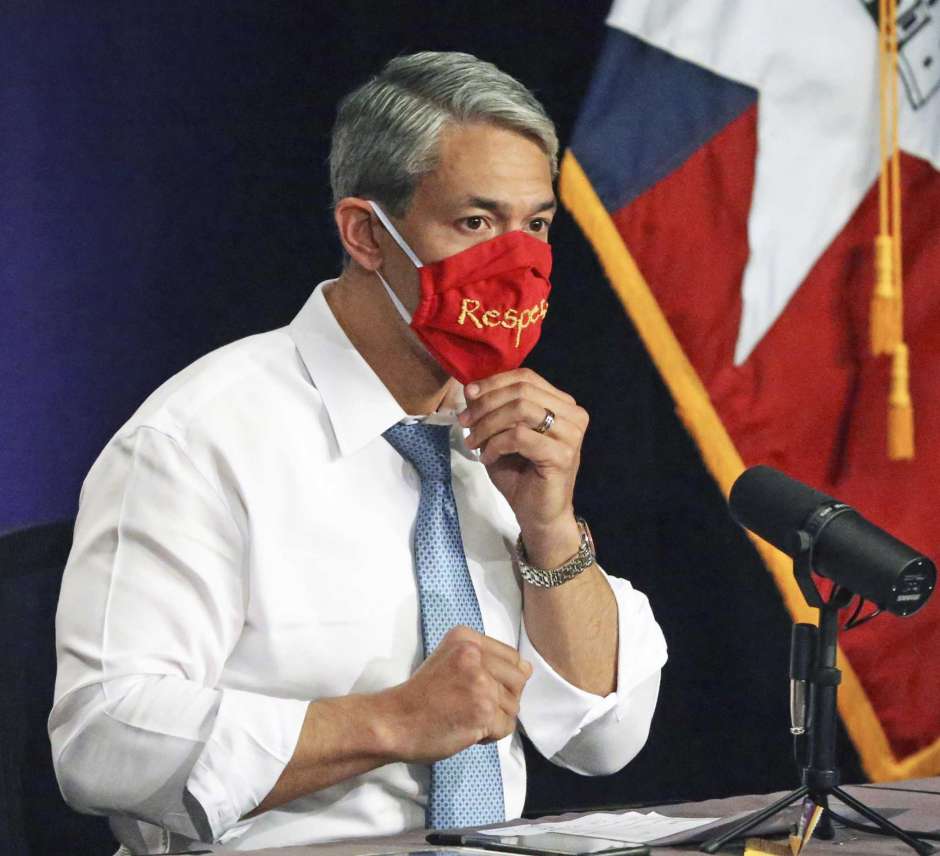 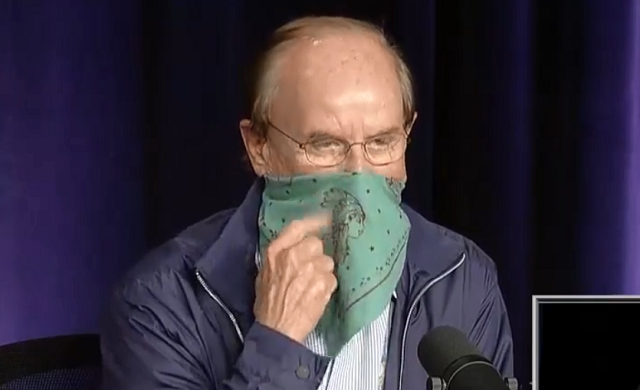 Bob Dylan was a big part of the soundtrack of my young life, as was Gordon Lightfoot. Since coming to San Antonio, I've been listening to some very old Dylan, songs that have a folk feeling and that come out of the landscape and the land, including the land around here. A new favorite that I'd never known before is the haunting Blind Willie McTell (1983), with its references to East Texas and to slavery and suffering.

And then there is the amazing songwriter and astonishingly resilient human who is Gordon Lightfoot! I recently learned that in 2002 Lightfoot suffered a series of serious health crises, necessitating a string of surgeries including a tracheotomy. Then in 2006 he had a minor stroke that left him without the use of the middle and ring fingers on his right hand. He fought his way back from all of this and here is Lightfoot performing on July 1, Canada Day, 2020.

For nostalgia's sake, here is something charming and romantic from 1968. This is the story of a guy who runs into someone from his hometown "a million miles away" and just can't help wondering "by the way" whether an old flame still remembers him: Did she mention my name?

I will leave you with two more images that I will not try to decode. If you have any responses, I'll be interested to hear!

I'll just say one thing about this last one, scribbled with my left hand (I'm right-handed). Time after time when I look inward and listen for advice, wisdom, guidance ... I get the reply: "Love is the answer ..."This I do believe. But how to bring that love ever more into my life and into this world ... I guess that is the question.